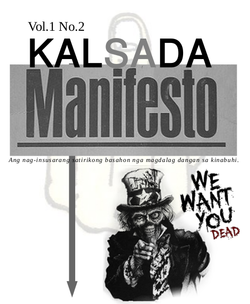 Cover for the Vol.1 No.2 Kalsada Manifesto by Gil Nambatac

Kalsada Manifesto is a Cebuano satirical 1 page 8-fold minizine published in Iligan City, Philippines, by Gil Nambatac. It focuses on giving commentaries about the contemporary Philippine society and culture in a form of a news item. Despite it's condensed form, Kalsada Manifesto encourages people to contribute articles and illustrations for th zine. First issue was printed on April 16, 2016.

Zines in the Philippines is not as much being crazied over by people compared to the other countries. Though there is a growing number of zines produced but the audience are still within the circle of zine makers. The creator doesn't intend to make one.

No. 1: (April 16, 2016) Features the upcoming 2016 Philippine Presidential Elections and the return of Kris Aquino in the TV scene.

No. 2: (April 18, 2016) Comments on the arrival of the American troops and their eminent presence inside the Philippine Territory.