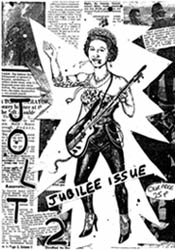 Jolt was a punk zine by Lucy Toothpaste.

Lucy Toothpaste focused on the women musicians in the punk scene. In an interview by Cazz Blase for The F-Word of May 2011, she said, ""My fanzine came from absolute excitement about the music and about the way things seemed to have cracked open. There was space for anybody to do whatever they wanted, including girls. You know, boys could get up on the stage who couldn't play their guitar and that meant that girls could get up onstage who couldn't play guitar either, so it was very, very democratic do it yourself stuff. I loved all of that." Musicians mentioned in the first issue included Siouxsie Sioux, Patti Smith, Ellie, of Stinky Toys, and The Runaways. Also featured was the article "Great Punks in History No. 1: Valerie Solanas", with excerpts from The SCUM Manifesto.

"Lucy: Were you angry about The News Of The World Interview ? Slits: Yes. The woman who came to interview us was so stupid, so stiff and posh. She just wanted drugs, sex & violence, so that's what we gave her. We were just taking the piss out of her."

The third issue featured an interview with Poly Styrene, from the band X-Ray Spex, and the Buzzcocks.

Lucy Toothpaste, now Lucy Whitman, continued writing for a number of publications after ending her zine.