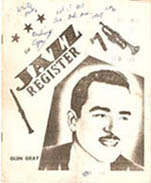 Jazz Register was a fanzine devoted to jazz music edited by Edgar Ward.

Jazz Register was a quarterly fanzine, published in Northwram, Halifax, Yorkshire in the UK.

The first issue was published during the January-March 1965 quarter. Three more issues followed in each quarter of that year, with Volume 2, No.1 published in the first quarter of 1966. Five issues appeared in total. It was a 12 page mimeographed publication.

The first issue features an editorial by Edgar Ward, and article on Glen Gray (1901-1963), with a discography; a list of collectible records for auction; and an article on Bob Lawson's Dixieland Band, among other items.

Copies are preserved in the Jazz Museum Bix Eiben, in Hamburg, Germany, and the Siena Jazz Foundation in Italy.