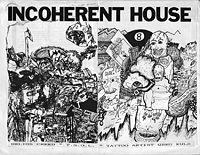 Incoherent House was a personal and music zine put out by Mitzi Waltz from 1985 to 1989, with contributions from various friends, in San Francisco, California, U.S.A.

It originally started as a "house zine" for 539 Scott Street in SF, which was home over the years to members of Caroliner Rainbow, Aunt Curehead, RKL, Rhythm Pigs, Half Blind, X-Tal, and other punk, post-punk and industrial/art damage bands. Mitzi's Albuquerque connections were an important factor as well, especially since a large number of people from the Albuquerque scene had moved to the Bay Area in 1984/85. This included the band Kor-Phu and members of Speed Queens, Helios Creed and Clown Alley.

The first issue had one-off covers made from metallic paper scraps glued onto a folded cut and paste format zine. Later issues mixed cut and paste and columns printed out via a portable electric typewriter, and were stitched together on the left side with yarn. Issues were photocopied, usually for free, by friends working at various copy shops around the area. The final two issues included some parts produced on a Mac and were printed via "employee theft press" at MacWeek magazine, where Mitzi was then working.