I am a Camera 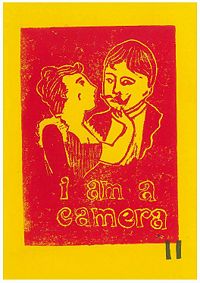 I am a Camera (1999-) is a personal zine created by Vanessa Berry, a writer based in Sydney, NSW, Australia.

The content varies but I am a Camera is generally focused on memories, secondhand objects, everyday life and photography. It was first published in 1999, and is now produced annually.

The author describes the impetus for the creation of this zine on her website as follows:

"I started I am a Camera in 1999, naming it after a newspaper headline (although I didn't know it at the time, it is also the name of a Christopher Isherwood play, and many other things, even a single by The Buggles). The sentence inspired me because it seemed a good description of what I have always tried to do in my writing, highlight details, as if they were a photograph being scrutinised."