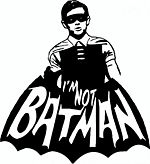 I'm Not Batman is a zine started by Jacob Sheppard in 2009, based in South West London, UK.

Mostly concentrating on music and alternative culture, the zine features articles on new bands and established artists, and also comic strips (created by Peter Basdenand Scott Smith) and consciousness writing. It features articles from various friends all brought together to create the publication.

The first issue will be released August 2009. It will be available via the internet and around various shops located in central and surrounding London