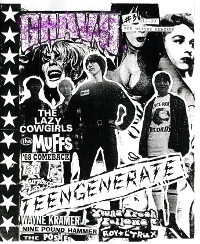 Gravy, was a music zine published by Kary Cousineau and Samia Aladas during the 1990s out of Quebec, Canada.

Gravy was a thick 7" x 8.5" zine mostly focused on garage rock and punk. During the 1990s five issues were published. Each cover usually featured a band and lots of cut and paste band names letting the reader know who was featured inside. The contents were almost entirely band interviews, done in a question and answer style, and laid out very punk rock cut and paste.