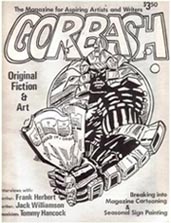 Gorbash was published in Lubbock, Texas, U.S.A. in the 1980s, and was named after a drunken dragon in Gordon R. Dickson's book The Dragon and the George. Issue 6 was released March 1982, and issue 7 didn't appear until 1991.