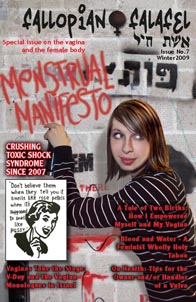 Fallopian Falafel (also named Eshet Chayil) was a Jerusalem-based feminist compilation zine published by Hadass S. Ben-Ari. The publication ran between 2007 and 2011, and published 16 issues. The zine was mostly in English but contained a few articles or poems in French and Hebrew.

The zine was about feminism and Riot Grrrl culture, and covered different topics pertaining to women.

Every issue included a column called "Riot Grrrl Corner" featuring a Riot Grrrl group and included lyrics to one of their songs that relates to the topic of the respective issue.