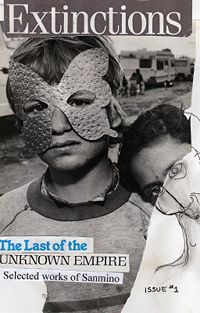 Extinctions is a poetic/ art zine created by Joseph Delgado, a poet and zinemaker from Albuquerque, New Mexico, currently living in exile in Mohave Valley, Arizona.

Extinctions is created as series of experimental poetic pieces coupled with art and 'pirated' images, each issue a collection or entry from an archaic archive of lost knowledge of 'brotherhood of el coyote' a gathering of lost men, rural cowboys, queer truckers, prostitutes, hustlers, porn shop enthusiasts, medicine men who created a clan of thinkers, writers, poets, fornicators....now that all the founders and clan are gone and 'extinct', their private mysterious knowledge is being released....dark, blasphemous, heretical, beautiful are just some of the expressions given in praise of the brotherhood's texts, now being resurfaced, being reconstructed for a new generation.

Extinctions is a variant of Poetic terrorism, a zine by the same author that ran for 10 consecutive years out of Albuquerque and Santa Fe, New Mexico from 1994 till 2004. Extinctions zine was formally founded on January 2008 after several 'one-shots' were developed with varying titles and themes that would eventually lead to the unifying concept of 'extinctions.' During the years 2004 and 2008, the author focused on producing several poetry manuscripts for professional publication; the experimental work cut from the final process, coupled with experimental work done on the side, formed the basis for this 'heretical archive' of homoerotic love, madness, despair, death, chaos in the isolated and lost deserts of the southwest. 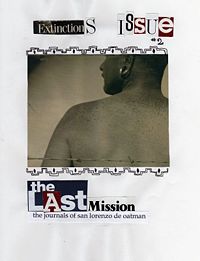 "Extinctions" was originally founded with the same guiding principles of "poetic terrorism" in that it focused on minority communities such as Chicano, Mexicano, Indigenous/Native American with some focus on queers within those cultural enclaves. "extinctions" seeks to give voice to the perspective of queer Chicano men in the barrio, or who are raised in a more macho urban environment enveloped in myth, ritual, superstition, and religious fever that is deeply rooted in both everyday secular life as well as private religious familial experiences and engagements. "extinctions" is aimed at the 'fringe' of social norms, aimed at giving voice and providing entertainment, food for thought with a community perhaps left ignored by dominant social structures and norms set forth by each varying and unique community. "extinctions" is a culmination in almost 15 years of creative poetic work, poetic monologues, synthesis of artistic, ink related elements. 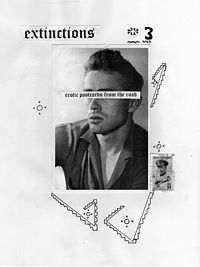 Each issue of "extinctions" is produced on an average run of 60 to 200 copies each issue, but this greatly varies, as 'extinctions' is not copied/printed in a regular manner; rather is printed 'guerilla' style on xerox machines, copiers perhaps in close proximity or at least easy and available access, but also is limited by time constraints, presence of others near and in relation to the said copiers. Eighty to ninety percent of each run is for trade and free distribution only. "extinctions" on its masthead requests $1.00 USD for each issue; this money is utilized to offset shipping costs, materials to ship, but does not include any charge for printing as the printing again is provided, or at least procured on a 'free' basis. "extinctions" is free to prisoners, prostitutes, junkies, go go boys, queer truckers, glory hole lovers, penitentes, cowboys....one would be more likely to find "extinctions" in a laundry mat, taqueria, porn shop, public bathroom rather than in a bookstore, trendy record shop, or zine distro.

Extinctions emerges from the canal banks, the cackling of buzzards, the wind slipping through greasewood and sheep tracks. extinctions is a manifestation of ancient songs, stories, connections to a historical landscape, one which transcends what is now. extinctions emerges full fist of moon, mouths wavering, extinctions rises like mist from truck stops, glory holes, poems and psalms etched onto bathroom walls, deserts, lost motels, stories some would rather not tell, but must be told. a vanishing breed of men, rural exiles, urban lost, vacqueros lost on the horizon....these that beg to be told. ---taken from the masthead of 'extinctions' issue #5 (recently revamped/ only slightly)

ZINE IS OUT OF PRINT

OUT OF PRINT/NO LONGER AVAILABLE