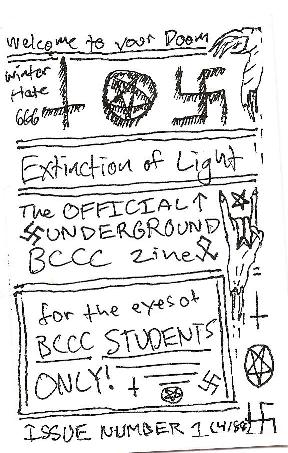 Extinction of Light was a short lived campus zine published in Bristol, Pennsylvania for the Bucks County Community College campus.

The zine focused on a variety of topics with a loose pretense of covering campus issues and commenting on the undefined "underground". Production of the zine came to an end after it was banned from the BCCC campus for its controversial content.

EoL was conceived, written, and printed entirely by a BCCC student called Kvisling, using a variety of pseudonyms, in September of 2008. It was sold on the Lower Bucks campus for twenty-five cents per issue. The goals of the publication, as stated in the first issue were to "1: to spread a message of ruthlessness and evil to all BCCC students, 2: to discredit and disrupt the everyday functions of government, 3: to influence the minds of its readers, 4: to follow and comment upon the various movements of the underground, 5: to blow the minds of squares, and 6: to entertain". These goals, along with the general tone and content of the zine, which featured many inverted crosses and swastikas in the artwork, as well as articles critical of campus policies, racist and sexist commentary, and extremely violent works of fiction, were found to be extremely objectionable by students and faculty. The zine made it's way to campus officials, who shortly thereafter told Kvisling that the publication violated the campus code of conduct and threatened to press criminal charges against him if he continued to distribute EoL on campus. Kvisling's classes ended shortly after this, and he did not attempted to distrubute Eol further on BCCC grounds.

#1: The only issue released on the BCCC campus. Sold about thirty copies.

#2: Printed, but barred from being distributed on campus. Copies were sent to friends and associates.

#4: Written entirely by Kvisling but never printed or released.

Kvisling has stated that all four issues may be re-released some time in the future, possibly as a bonus sent out with other publications, as well as a possible fifth issue to "cap-end the saga". It was alluded that it may be a split issue with Doom Reich, a zine published by close friend Greven Melkor.