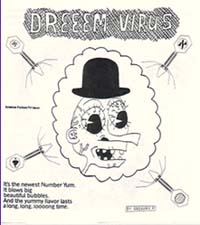 Dreeem Virus is a minicomic by Gregory Kalyniuk published in Toronto On, Canada.

Dreeem Virus was published by Kalyniuk under the name "Gregory K". It is considered an 'art- brut' comic zine and was released in 1995. It includes comics about Tristan, Stuntman William and Greedo (from Star Wars). The publisher also created stickers of his characters which he would include in his zine.

Gregory Kalyniuk, as Gregory K, also published the zines The Rise and Fall of Mr. Fuck You Man and Exploring Time & Space, among other titles.

Dreeem Virus is included in the collection of the Toronto Zine Library.