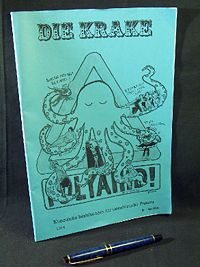 Die Krake (German for "The Octopus") is a zine by Gwendolin Altenhöfer from Munich, Germany

It's about polyamorous relationships with a focus on the love life of lesbians. So far in its second issue it holds the ironic subtitle “Künstliche Beziehungen für unnatürliche Frauen”. Full of essays, first-hand reports, interviews, historic statements on polyamory, comics and images, it gives a great insight into various opinions and experiences of women who love not one but many! It’s mostly written in German but has some English essays and comics.