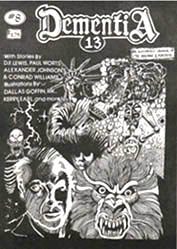 Dementia 13 was a horror and weird fiction sine by Pam Creais.

Subtitled "An Illustrated Journal of the Arcane & Macabre", Dementia 13 began publishing in 1989 in Sidcup, Kent, in the UK. It featured fiction, articles, interviews, illustrations, and letters of comment. 14 issues were released, the last issue appearing in 1994.

Articles were by Joel Lane, D.F. Lewis, Mike Philbin (as Hertzan Chimera), and Mark Samuels, among others.

Also featured were interviews with writers such as Ramsey Campbell, Simon Clark, and John Pritchard.

Letters came from Mark Samuels, among others.