Deadpan Distro is a distro based out of Orange County, California, U.S.A.

The distro's website states that it has been open since 1993. As of October 2009, it is unclear if the distro is still active. 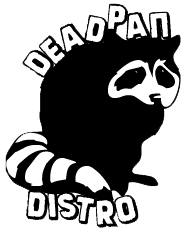 Proposed logo that was never used

Deadpan Distro was founded in the summer of 2003 in Irvine, California by Maria-Mercedes Lara and Martin Achterhof.

It can be said the distro was a result of the over-conservative climate of Orange County at the time, and the need for an outlet for subversive and independent media.

Over the years Deadpan had been involved in many political and social happenings around Orange County. Volunteers from Deadpan were also involved with groups like Food Not Bombs and the Orange County Peace Movement.

It was also not uncommon to see Deadpan set up a literature table at places like Koo's Cafe in Long Beach or The Glass House in Pomona.

Throughout the years volunteers in the distro would come and go. Starting in about 2007, Jeff Swisshelm was involved in Deadpan and there was new life injected into the distro. Free shows for local independent bands were booked by Swisshelm and Achterhof at any place that would let them, particularly the Avalon Bar in Costa Mesa.