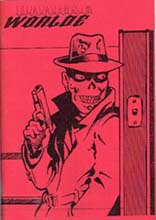 Published in the 1990s in Bacchus Marsh, Victoria, Australia, Daarke Worlde was a zine containing fiction, articles, poetry and art work devoted to horror and the supernatural. It began in 1992 as a spin off of The Melbourne Horror Society, available to club members but later became available by general subscription. The Assistant Editor was Chris A. Masters (EOD Magazine), who also wrote a series on classic horror movies for the zine.