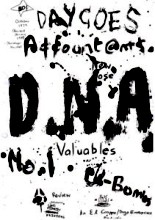 Over the years many other non-Adelaide bands have featured, often including detailed listings of lineups, recording sessions and releases for selected artists, plus sordid local gossip and occasional bad jokes. Live reviews come with complete set lists of songs performed. No pictures, just lots of typed out words, and very messy looking covers. This publication is more concerned with its contents than its appearance.