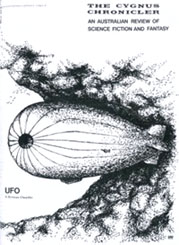 Cygnus Chronicler was published in West Ryde, New South Wales, Australia. It was begun in October 1977 as a fanzine newletter, with the second issue appearing March 1978. It was then relaunched as a small press publication in December 1979, running until 1983.

In their 1999 book Strange Constellations A History of Australian Science Fiction, authors Russell Blackford, Van Ikin, and Sean McMullen write, "Cygnus Chronicler started as a fanzine in 1977 but soon grew to a well-presented, professional looking semi-prozine. It featured fiction by Collins, Chandler, Wodhams, and others, and had some slick original artwork including that of Michael Dutkiewicz."