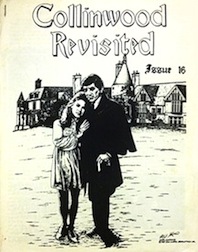 Collinwood Revisited was a fanzine by Bruce Yarbor devoted to the television serial Dark Shadows.