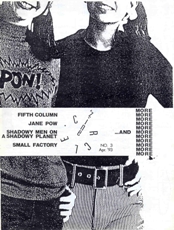 Circle 'Zine was a zine created by Mike White.

Released in Toronto, Ontario, Canada, at least three issues of Circle 'Zine appeared in the early 1990's. It was a full-size cut and paste publication that covered mainly music in the alternative, indie, 1960's, garage and punk range, featuring interviews with bands such as Jane Pow, Small Factory, Shadowy Men on a Shadowy Planet, and Fifth Column, including photographs of the bands.

Circle 'Zine also featured interviews with other zine editors, including one with Glynis, editor of Feline Frenzy, an Ontario zine that focussed on mod, 1960's and garage style bands. There were also reviews of recordings and a brief editorial by editor Mike.