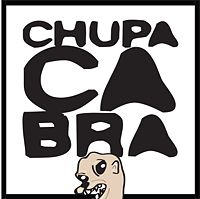 Chupacabra (2013) is a minicomic by Chris Talbot-Heindl, in Stevens Point, Wisconsin.

This zine project explores the idea that maybe the chupacabra has gotten a bad wrap. Did anyone sit and wonder what it might be like to be el chupacabra? Hated and feared by all?

What if the sheep may be so fearful and disgusted with el chupacabra that they bring about their own demise; leaving the poor creature alone and shunned?