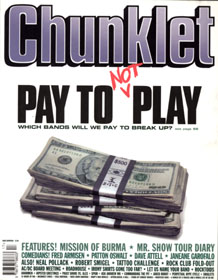 Chunklet is a music and humor zine published by Henry H. Owings of Atlanta, GA. It is known for its derisive criticism and satirical tone.

Owings began publishing Chunklet when he became frustrated with freelance music writing. Early issues were handmade and sparsely circulated; more recently, it has taken on the production values and practices (e.g. selling advertisements) of a major magazine, while retaining its contrarian editorial stance. An outrageously harsh appraisal of a band will often run in close proximity to an ad for that band's latest album.

Popular features have included an inventory of the "Top 100 Assholes in Rock" (formatted to resemble a Billboard chart) and a directory of "overrated" albums. The latter spawned The Overrated Book, published in 2006 and comprised mostly of excerpts from the zine.