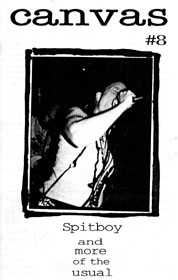 Canvas was a punk zine published by Jamie Kennard out of Fairport, New York during the 1990's. Each issue featured band interviews, a lot of personal writing and columns and reviews.

#5: Interviews with the Doughboys and the Figgs, movie, zine, and record reviews, columns on college life and racism

#8: Long interview with Spitboy, lots of columns and reviews