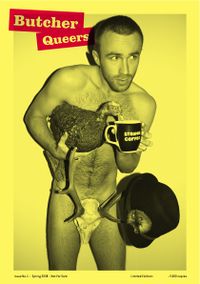 Butcher Queers is a limited edition LGBTQ zine from Dublin, Ireland. Butcher Queers was conceived in 2008 by artist Will St Leger

The term, ‘Butcher Queers’ was conceived by graphic designer Niall Sweeney, who used it as sticker slogan for the gay club called H.A.M. In 2007, designer and artist Will St Leger collated articles and artwork from writers and artists to produce the first issue of Butcher Queers. It was published as a 34 page zine in April 2008. Butcher queers is printed in black and magenta on pale yellow stock.

'Fresh Meat' - The cover of issue one features a a spontaneous and quirky photo shoot by photographer by Daniel Holfeld with his friend Chris. Articles in the first issue ranged from 'in-scene' homophobia, target marketing to gay men, Yaoi culture and marriage equality rights.