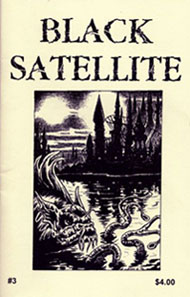 Black Satellite was subtitled "The Magazine of Startling Science Fiction and Weird Horror!". It was published in Boylston, Maine, U.S.A. in the 2000s. The editor further described the zine: "Black Satellite hopes to capture some of the spirit of The Outer Limits, The Twilight Zone, the Alien movies, or even the old magazine Argonaut."