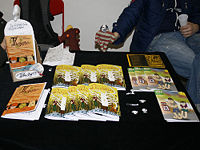 Stall on the comic festival Hinterconti

The first issue was published in May 2007 with the theme Der Spargelsaison Begleiter (German for "Asparagus season assistant") the other issues are random stories mostly about the characters Alfred Pumpernickel, Kalma & Waltraud.

Four issues have appeared so far.