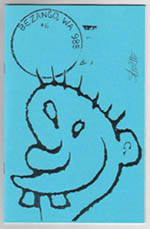 BEZANGO WA 985 is a minicomic by Steve Willis of McCleary, Washington, U.S.A..

Steve Willis introduces his mini comic on the inside cover of issue one: "Hidden in the Coastal Mountains of Southwest Washington State is an obscure town far from Interstate 5, far from the sphere of influence of a major metropolitan region. Welcome to Bezango, Washington. Allow me to introduce you to a few of our citizens."

This zine consists of a series of short stories about the strange citizens of this town, which often interconnect. It is not a comic book per se, but each story is extensively illustrated.

The zine first appeared in 2002 and since then at least 8 issues have been released. Steve Willis has published a number of other titles and has been releasing mini comics since the 1970's.