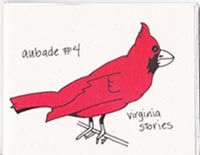 aubade is an annual perzine started in 2005 and written and edited by Katie Ash.

audabe was begun in 2005. It chronicles the trials and tribulations of sophomore year of college of Katie Ash, and onward.