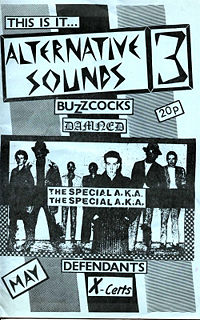 Alternative Sounds was Coventry, UK's first punk/post punk fanzine, a catalyst for the local scene that was breaking through nationally in the UK at the time with the success of the Two Tone label, the fanzine ran for 18 issues from 1979-81 and was produced by Martin Bowes.

Included in Alternative Sounds were interviews with local and visiting bands, record, tape and fanzine reviews by Martin and a number of guest writers who later went on to form their own fanzines. Martin also put together the "Sent from Coventry" compilation of upcoming Coventry punk and post punk bands, released on Cherry Red Records in 1980. That same year the Martin and the fanzine were also featured in a piece on making your own zine on the BBC TV youth programme "Something Else". Martin Bowes later went on to form electronic dark industrial band Attrition.