Alive On the Inside

Alive On the Inside was conceived in the summer of 2006, when Lenore von Angel [1] was inspired by stories of sideshow freaks that appeared in the pages of Weird New Jersey.

The idea to create a resource of information on circus and sideshow history was born, and in the months that followed, the articles were penned, edited and complied. The project also included notable Philadelphia sideshow performer Barry Silver [2] who became co-editor and greatly contributed to making the idea into reality.

The purpose of Alive On the Inside is to not only preserve the history and tradition of circus and sideshow for future generations, but also to make the public aware of the fact that it still remains in an era where the internet can deliver whatever one desires with the simple click of a mouse. However, all the images and videos on a screen do not compare to a live performance. For many entertainers, these shows are how they make their living. If people are not willing to support them, then they (as well as circus and sideshow as a whole) are in danger of becoming extinct.

Nickel Empire Media is proud to publish and distribute this fanzine [twice a year] to everyone world wide. 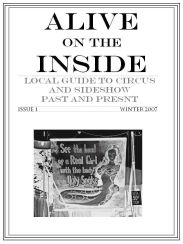 The pre-release of Issue 1 occurred on Dec. 30, 2006. The first edition was distributed to friends and family. The printing was limited to fifty copies, each individually numbered and a small handful being signed. A second edition was released in 2007 and only a handful of those remain. 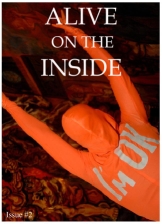 First edition run of ten copies released in fall of 2007. The issue was originally designed with a full color cover along with color photographs throughout, but has been printed in black and white.

+Photos: performers, shows, banner lines, singel-o's, modifications. Note: I do not want photos printed from the internet. I am perfectly capable of scouring it for content. What I am interested in are personal photos, and all photographers will be properly credited.

[For those that wish to place an ad, please be aware that there is a nominal fee for doing so; the donation will go towards future issues of the 'zine.]

Submissions are to be sent via e-mail to: lenorevonangel@gmail.com