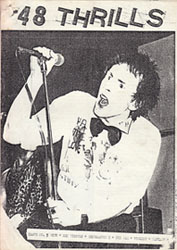 One of the early punk fanzines, the first issue of 48 Thrills! came out in November of 1976.

Issue 1 featured the bands Sex Pistols, The Clash, Exter, and Subway Sect; Issue 2, from 1977, featured The Clash, Generation X, The Jam; on the cover of Issue 4, released 1977, is a photo of The Clash; Issue 5, also from 1977, featured a photo of Johnny Rotten, and listed the bands Sex Pistols, Generation X, and The Jam. Other bands included in the zine are The Adverts, Buzzcocks, Chelsea, and The Cortinas.

Editor Adrian says of his zine, "I do the mag because it's enjoyable writing, gives me a feeling of involvement and a chance to say exactly what I feel."

The cover of one issue announces, "...and the only adverts in this mag are T.V. Smith's fucking group!"