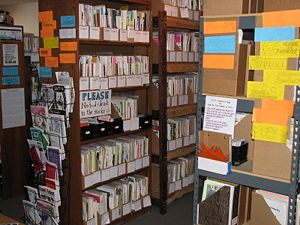 ZAPP was started in 1996 with the personal collections of Gary Greaves and Chuck Swain. Since then, the collection has grown to more than 20,000 items, making it one of the largest zine collections in the world. ZAPP was temporarily closed in 2007 and the collection was placed in storage. After moving the stacks, ZAPP was reopened with regular open hours in September 2008.

During its run, ZAPP held a number of classes, gallery exhibits, and other events throughout the year for both youth and adult audiences.

ZAPP was not a lending library; however, the collection was available for browsing during open hours. The collection's partial catalogue was accessible on-site.