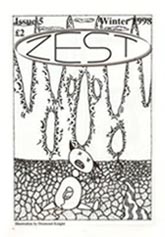 Zest was a small press publication published by Ian Redman.

Zest was a science fiction fanzine that focused on fiction and poetry and was published in the 1990s in Yeovil, Somerset, UK. Nine issues were released, the first in Winter 1977, and the last in Winter 1999.