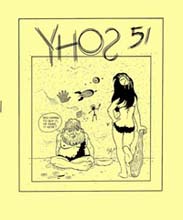 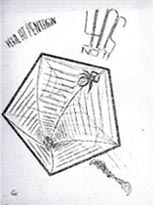 YHOS (acromyn for Your Humble Obiedient Servant) is a long-running fanzine published by Art Widner.

It is a science fiction zine that is published in Orinda, California. U.S.A. and largely distributed through the Fantasy Amateur Press Association. YHOS stands for "Your Humble and Obedient Servant".

It was first published from 1940 till 1945, when the first thirteen issues were produced. Art Widner is well known for the very long break he took from fanzines, but upon his return to activity in 1979 he resumed publication of YHOS till 2001, and issues 14 to 58 were released.

Contributors of writing in the 1940s included Glen Daniels, and George Ebey (Sappho).

Contributors of art work in the years from 1940 to 1945 included Harry Turner (Zenith).

Letters came from Charles Burbee (Shangri L'Affaires), and Alexis Gilliland, among others,