Difference between revisions of "Xenium" 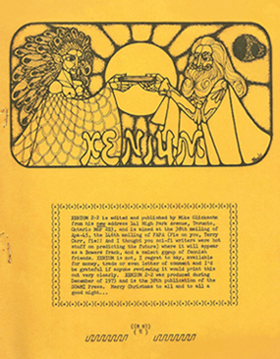 Xenium was a science fiction fanzine by Mike Glicksohn.

Published in Toronto, Ontario, Canada, Xenium was begun as an apazine for APA-45 by Mike Glicksohn and Susan Wood; as of issue four, which was constituted as "Volume 2", it was edited by Mike Glicksohn alone, and was distributed by Fantasy Amateur Press Association for a short period of time. It was subtitled "The Fanzine That Gives You Something Extra", and included small mementoes of Glicksohn's personal life, such as subway transfers, swizzle sticks, credit card slips, and so on. 15 issues were published between January 1973 and January 1990.