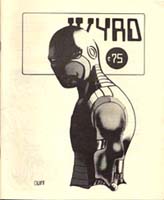 Wyrd was published in the 1970s, with various editors at the helm. Issue 3, released in Michigan, was edited by Al D. Cockrell and Irvin L. Wagner. Issue 4 was published in Santa Rosa, California by Brian Crist and Greg Stafford in 1975. Issue 6 came from Albany, California and was edited by Greg Stafford in 1976. 1977 saw Issue 7 arrive with the same editor from the same location.