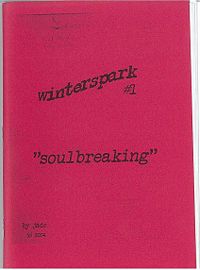 The first issue of Winterspark zine was released in November 2004 and was subtitled "Soulbreaking". The most recent issue, issue 4, was subtitled "Where We Belong" and released in March 2006. Winterspark zine has touched on issues such as recovering from depression, travel experiences, breakups and new relationships, becoming a pseudo step-parent, and office life culture. It has featured some of the writer's fiction & prose and art journal entries, and her photography as well.