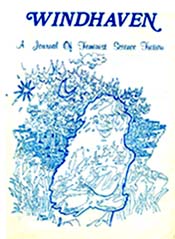 Windhaven is a feminist science fiction and fantasy fanzine by Jessica Amanda Salmonson.

First published in 1977, the subtitle of the publication was "Toward a Feminist and Humanitarian Fantasy and Science Fiction". It was published in Seattle, Washington, U.S.A. Five issues appeared, the last in 1979.

Issue 5 included the ground breaking essay "Why Blacks Don't Read Science Fiction" by Charles Saunders, one of the first such essays to address the role of race in the genre.