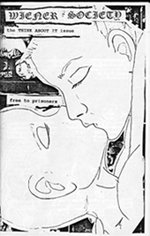 Wiener Society was by Neil Edgar, who created his zine from prison.

In Wiener Society, Neil Edgar wrote about his life at that time as a bisexual pagan punk incarcerated in the California prison system, what led to his imprisonment, and his existence since being locked up. Eight issues were released. Earlier issues included interviews with bands such as Smut and False Identity in issue two, Riff-Raff and Decimation Of Authority in issue three, and Bloodhag and Limp Wrist in issue six.

Weiner Society was distributed by Fanorama (whose distro he helped launch), as was the other zine he produced, called Obscene Emission. Neil Edgar's writing has been published in Fanorama and Maximum Rock 'N' Roll as well as in the anthology That's Revolting, a book published by Suspect Thoughts.