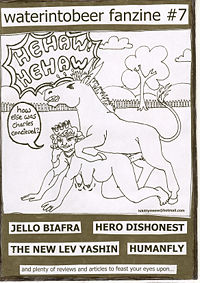 Waterintobeer fanzine was published by Luke B and Turtle Tim out of Leeds, England. Luke D and The Fair Maiden of Yorkshire were part of the main four people who were responsible for the zines output.

Waterintobeer lasted 10 issues, beginning in July 2002 and ending in late 2004. Issue 7 was a split zine with Gadgie. The zine came in an A5 format, and each issue varied in the size of print run, from as low as 200 to as high as 666. In its early days it was printed at the local universities, and in its latter days it was printed at Footprinters Workers Co-op. The zine mainly focused on the Leeds scene, yet there was coverage of the scene in Sunderland and the north of England, as well as the scene in Finland. Besides the music, the zine featured an ever-changing roster of article writers covering an array of subjects, yet Luke B, Turtle Tim, Luke D, and The Fair Maiden of Yorkshire were featured throughout the zines short history. The zine was popular throughout the north of England, yet its deliberately controversial, provoking disregard for political correctness meant that it was disregarded by certain elements of the scene. In 2005, Luke B released a short newsletter named waterintobeer #10.5. Although the zine is not around anymore, there is a football team that play in the Leeds Sunday Football League named waterintobeer FC.