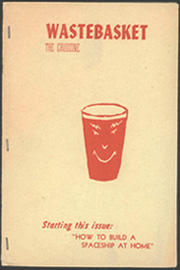 Wastebasket was published in Eugene, Oregon, U.S.A. in the 1950s. The subtitle of the fanzine was "The Crudzine". The co-editor, as of issue four, was Walt Willis.

The Staff Artist was Rosco Wright (Beyond, Eusifanso, Viewpoints) and other art work was by Shelby Vick (Confusion).

Wastebasket was distributed by the Fantasy Amateur Press Association. Editor McCain received warning that he would need to remove objectionable material before they would consent to distribute one issue. This case of censorship in fanzines became well-know among science fiction fanzine editors and fans.