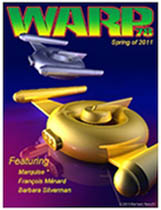 Warp is a science fiction fanzine published by the Montreal Science Fiction and Fantasy Association.

Artwork was contributed by Bernard Reischel, among others.