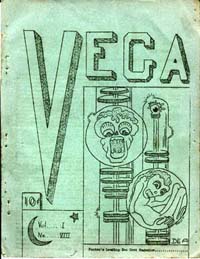 Vega was a science fiction fanzine published by Joel Nydahl.

Vega was first released in 1951 and came from Marquette, Michigan, U.S.A. In 1953 the last issue, #12, was released, an annual that was 100 pages. It was later claimed that the 15-year-old Nydahl had gone into debt to put out the issue and his father paid his debt on the condition that he quit fandom and fanzine publishing. His sudden disappearance lead to the creation of the phrase "Nydahl's Disease", when a fanzine editor disappears in a blaze of glory.