Difference between revisions of "Vampire Index" 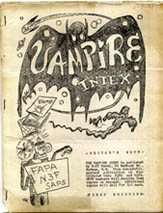 Vampire Index was a science fiction fanzine by Boff Perry.