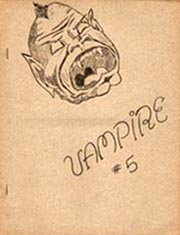 Vampire was a fanzine published by Joe Kennedy, later known as X. J. Kennedy, in the 1940s in Dover, New Jersey, U.S.A.

Vampire has been cited by writers and fan historians as being popular and a focal point of the period immediately following WWII. Perhaps it didn't hurt that Joe Kennedy was also a prolific letter writer to other zines.

Joe Kennedy later added an 'X' to his name and in the 1970s edited the journal Counter/Measures with wife Dorothy, and became poetry editor of Paris Review. He was a prolific author, writing at least 13 books, editing several anthologies, as well as writing at least 15 books for children.

In 1948, Boff Perry published Vampire Index, listing the contents and authors of each issue.