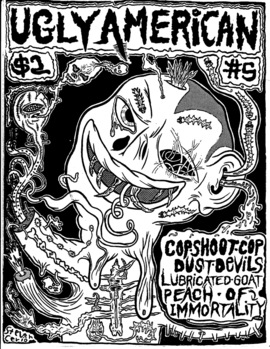 Ugly American was a music and pornography fanzine published for thirteen issues from 1988 to 1999. The New Jersey-based zine was published out of Pomona, New Gretna, Little Silver and Jersey City, although it retained strong ties to both the Red Bank music scene and the Pine Barrens, home of the Jersey Devil.

Ugly American was founded by Greg Chapman in 1988 for two reasons: First, he sought a forum for interests - which included abrasive indie rock, death metal, hip-hop, pornography, drugs and the occult - that were not being adequately addressed by either the mainstream or "underground" media; Second, he was disillusioned by his perception of both an increasingly commercial "independent" music scene and a correspondingly fashionable and sycophantic "alternative" press, the latter of which seemed to greet each new, successively more Top 40-oriented release with ever-greater enthusiasm. The result was a literary threshing machine that was used more to destroy the effete manifestations of indie rock than to champion new bands. Although most of Ugly American's writers were influenced by the caustic commentary of Forced Exposure and Conflict, they regarded the insider status of Byron Coley, Jimmy Johnson and Gerard Cosloy as detrimental to their respective roles as critics, and consequently adopted what they thought was a more independent approach to criticism. During the "peak" years of "alternative rock" (1990-1992), many of the rock-oriented music labels extant added Ugly American to their mailing list, only to blacklist the zine once said labels discovered that they couldn't establish the customary quid pro quo of positive reviews for the latest releases. In a roundabout way, Ugly American could be viewed as the dark, shadowy counterpart to CMJ magazine, because while the zine’s brand of gleeful antagonism alienated most labels, it also built a fanbase of industry employees and associates equally critical of the machinations of the music business. Gerard Cosloy, Lyle Preslar and Ben McOsker (of Load Records) were alleged fans, and for a brief period Chapman contributed to both Forced Exposure and Your Flesh (as well as Swank magazine, for which he continues to write video reviews). Also, many of the passing writers and contributors were in bands, and they included Tod Ashley (Cop Shoot Cop and Firewater), Lisa Carver (aka Suckdog), Tim Cronin (ex-Monster Magnet), Tom Smith (Peach of Immortality and To Live and Shave in L.A.), Bliss Blood and Scott Ayers (Pain Teens), Stefan Jaworzyn (ex-Skullflower), Simeon (Silver Apples), and Scott Ruth (Ripping Corpse and Dim Mak). Other contributors included Steven Cerio (illustrations for Dustdevils, The Residents, Monster Magnet, Helmet, et al.), Stephanie Himes, Rob Leecock, Tom Chesak (aka Reed Linklater Jr.), Freddy the Bastard, and Floyd Hardwick of Skin Trade magazine.

As to the "core" contributors, there are only a few relevant facts. First, three of the four original members were involved in small-scale (and now defunct) musical projects that, like Ugly American, had a handful of diehard supporters and numerous detractors. Chapman and Sullivan comprised two-thirds of Frown (Wallghost), Chapman was involved with Woozlebug (Mullicana), and was a touring member of both Temple of Bon Matin and To Live and Shave in L.A., and Marlowe released the self-titled Holland/Skin/Tunnel CD. Second, Ed Sullivan left after issue #10 for personal reasons, and the zine changed for both the better and the worse. Sullivan's sharp intelligence, scathing humor and generally excellent writing - all of which were instrumental in shaping Ugly American's identity - were sorely missed. On the other hand, the remaining members viewed the change as an opportunity to move the zine in a different direction, and the pieces written after Sullivan's departure are in general characterized more by extended forays into absurdist musing, abstract speculation, drug-fueled exegesis, and ramshackle critical theory than by the cheerfully vicious brevity of Ugly American's early years. And on a final note, Chapman suffered a stroke not long after issue #12 was released, and the zine appeared to be finished. Marlowe subsequently edited and financed the entirety of issue #13, as he and Chapman were the only two contributors at that point. Chapman felt the issue to be consistent with the previous issues, and Ugly American folded, he thought, "at the top of its game".

There are no known online archives of Ugly American.