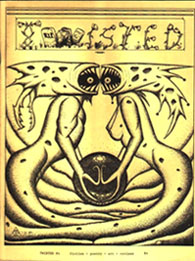 Twisted was a horror fanzine edited by Christine Hoard.

Articles were by David Bruce and Lawrence McCallum.