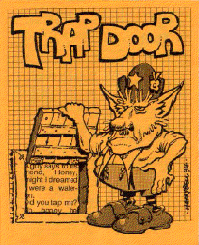 Trap Door is a science fiction fanzine by Robert Lichtman. As of March 2016, a total of 32 issues have been published. It was nominated for a Hugo award for Best Fanzine in 1987 and 1992, but did not win (probably due to its low circulation).

Previously Robert Lichtman had published Psi-Phi in the 1950s and early 1960s, Frap in 1963 and 1964, and 100% Whole Wheat in 1965 with Miriam Knight (Klein Bottle, A Funny Thing Happened On The Way To Poughkeepsie). After a period of being away from fandom he returned in the 1980s and began publishing Trap Door in 1983 in Glen Ellen, California, U.S.A. He is a longtime member of the Fantasy Amateur Press Association (FAPA), with his current membership starting in 1984 (and a previous one from 1962-70), and has served as its Secretary-Treasurer since 1986. He's also a member of long standing of the Spectator Amateur Press Society (SAPS), his current membership dating from 1982 (and previously from 1959-65).

Included in #17 was a poem by Julia Vinograd, For Dick Ellington, Berkeley Typesetter, on the occasion of his passing.

An installment of the column "The Cracked Eye" by Gary Hubbard was selected for reprinting in Fanthology '87.