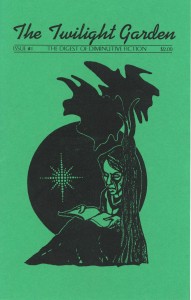 The Twilight Garden was a literary zine edited and published by Shane Ryan Staley.

Subtitled "The Digest of Diminutive Fiction", the first issue of this zine devoted to horror and fantasy was released in Fall 1998. The cover art work was by Cathy Buburuz (Champagne Horror), Randy Nakoneshny, and Marge B. Simon (Star*Line).

After the first issue, Shane Ryan Staley decided to devote each subsequent issue to one author. In this incarnation, The Twilight Garden became a chapbook. The second issue featured the writing of Kurt Newton.

Issue 3 appeared in Summer 1999, and featured horror writer Michael Laimo, whose short fiction pieces "Sir Robert, The Princess and the Dragon", ""Sweet Dreams", "To Be", "The Baby", and "Growing Up With a Murderer" were all included in this issue. Also included was an interview with Laimo by editor Shane Ryan Staley. The cover art work was by Cathy Buburuz, Randy Nakoneshny, and Marge B. Simon.