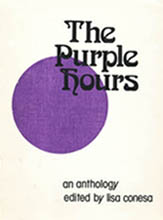 The Purple Hours was a one-issue-only poetry zine edited by Lisa Conesa and published in 1974 in Manchester, England, UK.

Illustrations are by Arthur Thomson (The ATom Anthology) and Harry Turner (Zenith, Now & Then), with a cover design by Harry Turner.

Lisa Conesa also published the fanzines Gambit, Iseult, and Zimri, which won the Nova Award for Best Fanzine in 1974.